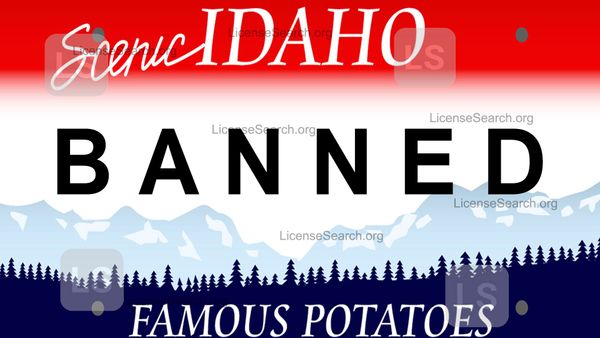 What are the license plates?

The license plates are individual plates that we also call vanity plates. In fact, some people want to personalize their vehicle plates. They usually put dates, numbers, initials, or some specific names on them. By this, they give special meanings to their license plates. This is a really nice way to make your vehicle look unique and interestingly express yourself. You can make different combinations of words and numbers and get a personal license plate.

Why are there so many banned license plates in Idaho?

Generally, the State of Idaho controls the use of license plates. In short, the Idaho Transportation Department is the body that regulates the process of getting license plates. The department gets applications for license plates, approves or rejects them. The ITD decides what kind of license plates are acceptable for the state. After that, they make the licenses by request and deliver them to the citizens.

However, as mentioned, some citizens apply for non-acceptable license plates with offensive meanings. The meanings are hidden very often, so the process will take time. Moreover, as in other states (like Alaska), some people write down unethical words where they replace some letters with similar numbers or sound similarly. For example, they can write “1” on behalf of “I”, “4” on behalf of “A”, “0” on behalf of “O’, etc.

What are common reasons for vanity plate refusal in Idaho?

We have gathered some combinations for license plates from Idaho citizens’ requests. Here are some immoral and offensive examples:

How much do the Idaho License Plates cost?

In the State of Idaho, usual license plates cost $25 only. The renewal costs only $15 each year. Meanwhile, specialty license issuance costs $35. The annual renewal fee is $25 each year. After submitting your request and paying the fee, the Idaho Transportation Department makes the license plate and delivers it to you.

Anna is a multilingual content writer and article writer from Armenia. No matter in which field she writes, she will deliver a highly optimized text with an accurate tone of voice. She is a skilled writer with a huge experience and background in writing, editing, proofreading, and optimizing a wide range of topics from articles, blog posts, researches, biographies, and website content. Writing is her passion, that’s why she can’t tolerate monotonous texts or mistakes. Working in the banking system, she is writing anything starting from financial documentation to selling copies for business with high optimization. One thing she definitely can’t do as a specialist and as a person is giving up.